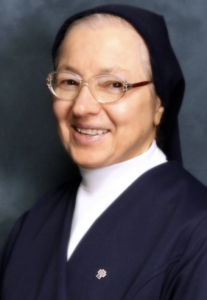 Sister Alexandrine (Lillian Gertrude) Lazzari died at Seton Residence in Evansville, Indiana on December 13, 2022. She was born on December 23, 1928, in Daphne, Alabama and was the sixth of ten children of Ida Josephine (Bertagnolli) and Alexander V. Lazzari. Sister graduated from Fairhope High School and entered the Daughters of Charity in St. Louis, Missouri in 1947.

After initial formation, Sister Alexandrine was missioned to St. Elizabeth Home in New Orleans, Louisiana where she served in the kitchen until 1962 and then continued to use these dietary skills at Mount St. Joseph in San Francisco, California until 1969 and St. Mary’s Home in Mobile, Alabama until 1977. Sister Alexandrine then served as a Parish Minister at St. John’s Mission in Charleston, Mississippi until 2000 when she returned to Mobile as a Patient Visitor at Allen Memorial Home. In 2002, Sister was missioned to Providence Hospital in Mobile as a Volunteer in Pastoral Care until 2019 when she came to Seton Residence in Evansville to serve in the Ministry of Prayer.

A Wake Service was held on Thursday, December 15 in the Seton Residence Chapel followed by the Mass of Christian Burial. Burial took place at St. Joseph Cemetery. Sister was preceded in death by her parents and her sisters Mary, Margaret (Defilppi), Alice (Simms), Barbara (Gable), her brothers Alexander, Angelo, and Lawrence and she is survived by her brother Louis Lazzari, and her sister, Vickie Parker, many nieces and nephews, her Sisters in Community and many friends.