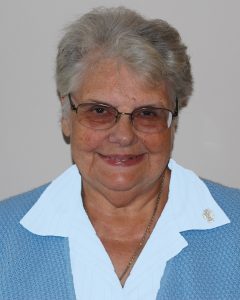 Sister Alice Marie (Frances Elizabeth) Smith, age 91, died at Villa St. Michael in Emmitsburg, Maryland on November 22, 2022. She was born March 12, 1931 in Baltimore, Maryland to Joseph Jerome and Alice Irene (Eichelberger) Smith. Before entering the Community, Sister Alice Marie was a member of St. Martin Parish in Baltimore. She graduated from St. Martin High School in 1949 and entered the Daughters of Charity December 18, 1949. She earned her Bachelor of Science Degree in History in 1967 from St. Joseph College in Emmitsburg.

After these years of teaching, Sister Alice Marie spent a year studying at St. Joseph College (1971-1972). Her next two missions were as a secondary teacher at Seton High School in Baltimore (1972-1977) and Elizabeth Seton High School in Bladensburg, Maryland (1977-1979). She spent the year 1979-1980 at St. Joseph Provincial House in Emmitsburg and then served as a Guidance Counselor at St. Joseph High School in Emmitsburg (1980-1981) and Gibbons High School in Petersburg, Virginia (1981-1983). From 1983-1984 she was a docent at the Shrine of St. Elizabeth Ann Seton in Emmitsburg. St. Agnes Hospital in Baltimore was her next mission where she served as registrar in the clinic (1984-1985). Following this she went to All Saints High School in Washington, D.C. as Registrar and Guidance Counselor (1985-1989). After this, she served in Parish Ministry and Evangelization at St. Martin Parish in Baltimore (1989-1990) and then she returned to work in the Shrine of St. Elizabeth Ann Seton as the Gift Shop Manager (1990-1994). For the next seven years, Sister Alice Marie had the privilege of taking care of her mother and sister. After her mother’s death, she returned to St. Agnes Hospital in Baltimore as a Patient Advocate (2001-2008). In 2008 she was missioned to Villa St. Michael in Emmitsburg where she served in the Ministry of Prayer until her death.

Sister Alice Marie was preceded in death by her parents, two brothers, Joseph Smith and James (Jerry) Smith and a sister, Mary Catherine Fitzgerald. She is survived by nieces and nephews, and her Sisters in Community.

A wake service was held on Friday, November 25 in the Villa Chapel in Emmitsburg. The Mass of Christian Burial took place on Saturday, November 26 in the Basilica of the National Shrine of St. Elizabeth Ann Seton in Emmitsburg with burial following in the Sacred Heart Cemetery.