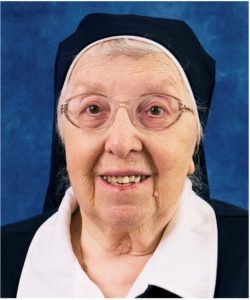 Sister Carmella Augello, baptized Anna, Daughter of Charity, died at St. Louise House, Albany, New York on December 2, 2022, one day before her 104th birthday. She was born in the North End neighborhood of Boston, Massachusetts on December 3, 1918 to Grazia Gioia and Matteo Augello. She had one sister Marie.

After high school, she worked as a secretary until she followed her vocation as a Daughter of Charity in 1948. She received her initial formation as a Daughter in Emmitsburg, Maryland and then served with children at St. Vincent Home, Saginaw, Michigan (1949-1951).

In 1951 she began a vital ministry in Central Purchasing for hospitals in Hyattsville, Maryland and Washington, D.C., which were run by her religious community. Later, starting in 1971, she was coordinator for several building and renovation programs for hospitals in Cochabamba, Bolivia; Binghamton, NY; and Boston, Massachusetts.

After some more years of Hospital ministry, Sister came to reside at St. Louise House in 1997; a facility which she helped to build years earlier. Here she has lived a ministry of prayer until her death.

Sister Carmella was predeceased by her parents, her sister, Marie Swanson, and her nephew Matthew Swanson. She is survived by her niece, Gloria Ferrer of San Diego, California and her nephew Albert Swanson of Sommerville, Massachusetts; several grandnieces and a grandnephew; by many friends and her Sisters in Community.

A wake for Sister Carmella was held Thursday, December 8 and the Mass of Christian burial was held on Friday December 9 in the DePaul Chapel, St. Louise House. Interment followed at St. Agnes Cemetery in Menands, Albany.