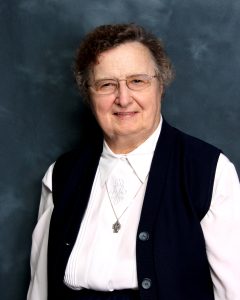 Sister Catherine Fitzgerald (Catherine Annette), age 88, died at Villa St. Michael in Emmitsburg, Maryland on September 15, 2021. She was born January 27, 1933 in Washington, D.C. to Annette Marie (Everett) and John Leroy Fitzgerald. Before entering the Community, Sister Catherine was a member of St. Francis Xavier Parish in Washington, D.C. She graduated from St. Paul’s Academy in Washington, D.C. in 1950 and entered the Daughters of Charity on December 22, 1952. She earned her Bachelor of Science Degree in Elementary Education in 1955 from St. Joseph College in Emmitsburg and her Master of Arts Degree in Mathematics in 1965 from The University of Detroit in Detroit, Michigan.

Following this, she went to the Shrine of St. Elizabeth Ann Seton in Emmitsburg as Administrator and Development Director (1980-1983). Her next mission was at Immaculate Conception Academy in Washington, D.C. as Teacher (1983-1984) and then All Saints High School in Washington, D.C. (1984-1989), again as a Teacher. Following this, Sister Catherine served as Director, Principal, and Teacher of the Educational Program at St. Ann’s Infant Home in Hyattsville (1989-1997). Her next assignment was as Teacher and Principal of the Educational Program at the Maryland House of Corrections in Bladensburg, Maryland (1997-2001). After this ministry, she was Principal at Patuxent Institution in Jessup, Maryland (2001-2003). She then served as an Instructor and Principal at Marian House in Baltimore (2003-2005). She served next at St. Benedict Parish in Baltimore as a Pastoral Associate (2006) and as Spiritual Moderator of the Ladies of Charity for the Archdiocese of Washington, D.C. (2006-2008). For the next several years, Sister Catherine was a volunteer in the Baltimore community (2008-2014). Sister Catherine was an educator in whatever ministry she was involved in, trying to improve the lives of those she served through education. In 2014 she was missioned to Villa St. Michael for the Ministry of Prayer, a ministry she held until her death.

Sister Catherine was preceded in death by her parents, brothers Roy, Joseph, Richard, and Francis and sisters Angela Bianchini and Mary Hodges-Neftel. She is survived by her sister Dolores Elizabeth Klopfer, nieces and nephews, and her Sisters in Community.