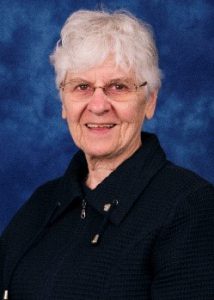 Sister Catherine (Mary Rose Catherine) Kline died on March 27, 2022 at Seton Residence in Evansville, Indiana. Sister was born in Perryville, Missouri and was one of ten children of Henry Joseph and Mary Lawrence (Mattingly) Kline. She graduated from St. Vincent High School in Perryville and entered the Daughters of Charity in St. Louis, Missouri in 1951.

After initial formation, Sister Catherine served as a teacher at St. Patrick School and St. Matthias School in St. Louis. She received a BA in English from Marillac College and an MA in Education/Early Childhood from Saint Louis University. She taught at St. Stephen School in New Orleans, Louisiana, St. Vincent Grade School in Perryville, Missouri and Sacred Heart Parish in Dupree, South Dakota. Sister Catherine was a missionary in Taiwan and Chongqing, China for many years and later served in Anchorage, Alaska and in Los Angeles, California at St. Vincent Medical Center. After returning to the Midwest, Sister volunteered in Evansville at United Caring Services, St. Vincent de Paul Food Pantry, St. Anthony Parish, St. Vincent Early Learning Center and in St. Louis at the Ladies of Charity Thrift Store. Sister Catherine spent her final days in the Ministry of Prayer at The Sarah Community in St. Louis and at Seton Residence in Evansville.

A Mass of Christian Burial was held at the National Shrine of Our Lady of the Miraculous Medal in Perryville, Missouri on April 2, 2022, with burial in St. Mary’s of the Barrens Cemetery.

Sister Catherine was preceded in death by her parents and her brothers Edgar and Merlin Kline and her sister Ann Kotnour; she is survived by her sisters Theresa Kelly, Louise Griesemer and Zelma Penny and her brothers Vincent and James Kline, many nieces and nephews, her Sisters in Community, and many friends.