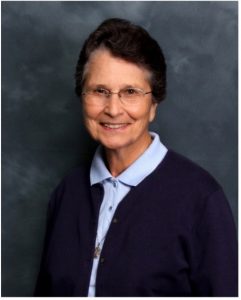 Sister Cora Anne Signaigo, age 83, died at Villa St. Michael in Emmitsburg, Maryland on March 29, 2022. She was born on November 25, 1938 in Norfolk, Virginia to Angeline Mary (Demma) and William Linwood Signaigo. She graduated from Granby High School in Norfolk in 1956. In 1959, she received a Nursing Diploma from DePaul Hospital School of Nursing in Norfolk and served for a few years in Pediatric Nursing. On June 27, 1964, Sister Cora Anne entered the Daughters of Charity in Emmitsburg, Maryland from her home parish of Blessed Sacrament in Norfolk.

Following initial formation, Sister Cora Anne was missioned to Sacred Heart Hospital in Cumberland, Maryland as Nurse Supervisor (1966-1970) and then served as a nurse at St. Vincent’s Child Care Center in Timonium, Maryland (1970-1971). From 1971-1973, she studied at St. Joseph College and received a Bachelor of Science Degree in Nursing in 1973, after which she returned to Sacred Heart Hospital in Cumberland as Nursing Supervisor (1973-1984). In 1982, Sister Cora Anne earned a master’s degree in Business Administration from Frostburg University in Frostburg, Maryland. Following her mission in Cumberland, she had a variety of positions: Administrative Assistant at Providence Hospital in Washington, D.C. (1984-1985); Director of the Maternity Program at St. Ann’s Infant Home in Hyattsville, Maryland (1985-1988); Coordinator of Senior Services at St. Agnes Hospital in Baltimore, Maryland (1988-1990); Vice President of Mission Services at Sacred Heart Hospital, Cumberland (1990-1993); Administrator at St. Joseph Provincial House, Emmitsburg (1993-1995); Provincial Treasurer for the Emmitsburg Province (1995-2003); Hispanic Outreach in Dover, Florida (2003-2004); Mission Integration at St. Vincent’s Medical Center in Jacksonville, Florida (2004-2007 and 2010-2014)); Sister Servant at Villa St. Michael, Emmitsburg (2007-2010); and in Mission Integration at the Daughters of Charity Services of New Orleans in New Orleans, Louisiana (2014-2016). Sister also served on the board for the Daughters’ Stewardship Assistance Fund for the Sisters’ ministries in Bolivia—an appointment that brought her much joy and the opportunity to visit with those whom the Daughters serve in Bolivia. Whether working with the sick, lay collaborators, or her Sisters, Sister Cora Anne brought much joy and happiness to all. In 2016, Sister Cora Anne was missioned to Villa St. Michael in Emmitsburg to serve in the Ministry of Prayer, a ministry she held until her death.

Sister Cora Anne was preceded in death by her parents. She is survived by her beloved brother William Linwood Signaigo (Judy), nephews, niece, cousins, friends, and her Sisters in Community.

A Wake service was held on Sunday, April 3 in the Villa Chapel in Emmitsburg. The Mass of Christian Burial took place Monday, April 4 at the Basilica of the National Shrine of Saint Elizabeth Ann Seton, followed by burial in the Sacred Heart Cemetery.