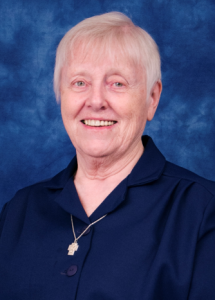 Sister Dorothy (Dorothy Lorraine) Olinger died on September 18, 2022 at Ascension St. Vincent Hospital in Evansville, Indiana. Sister was born on July 3, 1933 in Chicago, Illinois and was one of twelve children of Madona (Coonrad) and Peter Olinger. Sister Dorothy graduated from St. Gregory High School in Chicago and entered the Daughters of Charity in St. Louis, Missouri in 1952.

A Wake Service was held on Monday, September 26, 2022 in the Seton Residence Chapel followed by the Mass of Christian Burial; internment at St. Joseph Cemetery. Sister was preceded in death by her sisters Patricia LoCoco, Mary Catherine Drollinger, Margaret Sellars, Elizabeth Keller and Elaine Tipton and her brothers William, Thomas, John and Joseph Olinger and she is survived by her brother Michael Olinger and her sister Donna Talley, nieces and nephews, her Sisters in Community and many friends.