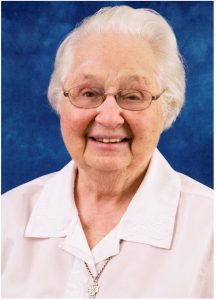 Sister Enda McArdle, D.C., died on September 14, 2022 at St. Louise House in Albany, New York. She was 102 years of age and 84 years as a Daughter of Charity. Sister Enda (formerly Sister Zoe) was born in Albany on March 14, 1920, the sixth of eight children of Edward James McArdle and Catherine (McGarry) McArdle. The family were parishioners of St. Joseph’s Church, and Sister Enda attended St. Joseph’s Academy, staffed by the Daughters of Charity. She entered the Community on December 21, 1937 at Mt. Hope Retreat and St. Martin’s School in Baltimore, Maryland.

Sister Enda served in the ministry of education as an elementary, secondary and ESL teacher. She earned her Bachelor of Science degree in Education from St. Joseph College in Emmitsburg, Maryland (1955) and her master’s degree in Elementary Education from Boston College Chestnut Hill in Massachusetts (1960). She also studied Spanish in Colombia and Puerto Rico.

For over 60 years, Sister Enda taught at grade schools and high schools located along the Eastern seaboard that included the following cities: Washington, D.C.; Lynchburg and Portsmouth, Virginia; Cambridge and Boston, Massachusetts; Wheaton and Baltimore, Maryland; and Utica, Albany, Brooklyn, and Syracuse, New York. From 1999 to 2012, Sister taught math at the Roarke Center in Troy, New York helping adults prepare for the GED.

In October 2010 Sister was honored by the Capital District Senior Issues Forum with the 2010 Senior Lifetime Achievement Award. The New York State Assembly also noted Sister’s “past and future contributions to our community and as a recipient” of the annual award.

In September 2012, Sister moved to St. Louise House in Menands, New York, where she served in the Ministry of Prayer until the time of her death. Sister was known for her joyful spirit and her love for the Saratoga racetrack. She was greatly loved by the Sisters and staff of St. Louise House, who will certainly miss hearing her unfailing reply of “fine and dandy” when asked how she was feeling.

A Wake Service was held for Sister Enda on Monday, September 19; the Mass of Christian Burial took place on Tuesday, September 20. Both services were held at St. Louise House. Interment was in St. Agnes Cemetery in Menands.

Sister is survived by her sister-in-law, Kitty of Charlotte, North Carolina; by nieces; her Sisters in Community; and many friends.