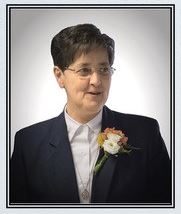 Jocelyne Marie Bernadette Joly was born in Montreal on February 22, 1946. She was the oldest of four children of Maurice Joly and Carmen Laroche. Jocelyne completed primary and secondary education in Boucherville. Following this, she was a residential student at Saint Jacques de Montcalm for 4 years, at the Family Studies Institute.

One of her first jobs was teaching sewing, which led to her working for the Singer company where she taught the sewing machine repair staff how to repair the machines!

Jocelyne always loved to learn and to teach. She loved to read, discover and share. A deeply spiritual woman, she discovered God in his Word, in nature, especially in flowers and birds, and in music, as she played the piano and used this gift to serve the church and praise God by organizing a choir.

She shared her passion for nature with the Girl Scouts where she was a troop leader and organized groups of young ­­­­people. Jocelyne also served in parish ministry in several parishes and taught catechism. In addition, she received a pastoral certification for the Diocese of Montreal.

Jocelyne felt called to religious life and was attracted to the Sisters of the Holy Apostles, whose charism is to provide the church with apostles for its needs. While in this community, she studied at the University of Montreal, with a major in theology and a minor in biblical studies. She also took many courses in natural science which she loved.

In the 10 years in the Sisters of the Holy Apostles, Jocelyne worked in Saint Vital’s parish where she met Alfred Couture, a seminarian at that time. He was the organist and she was the choir director. They became good friends, often spending evenings with Alfred’s family playing the piano and singing. Jocelyne helped Alfred to prepare for his ordination.

After 10 years with the Sisters of the Holy Apostles, Jocelyne left this community and became a pre-school teacher where her passion for music and nature contributed to the young children’s development. Later, she became director of a nursery school. She owned a car and a house in Mascouche, [Quebec].

She was living with a friend, Francine, who was interested in becoming a Daughter of Charity and who was in contact with Sr. Blanche in Montreal. While visiting the Daughters of Charity with Francine, an emergency situation arose for a family who needed food. Jocelyne immediately thought of the monks who had offered her food from their farm if any needs ever presented themselves. God’s Providence was at work for this family and in the heart of Jocelyne, who on the return trip on Route 640 with an abundance of food, clearly heard the call of God to serve poor persons as a Daughter of Charity.

Jocelyne then entered this community and had her formation in France. Upon returning from France, she served in pastoral ministry in Saint Donat’s parish. In addition, she provided after-school homework help there for refugee and immigrant children whose parents didn’t speak French.

Jocelyne received formation in Spiritual Direction in Colorado with Vie Thorgren and another in Montréal at ‘Le Pèlerin’ which permitted her to accompany many on their spiritual journey.

Several years later, the Province of Albany named her Provincial Councilor, and after this time, she volunteered for the missions and was sent to Kenya where she served in women’s promotion through sewing workshops. After 4 years, Jocelyne returned to Montreal when her health condition prevented her from remaining in Kenya. She became involved in the parish of the Nativity of the Blessed Virgin with her Vincentian confreres. She was director of liturgy and taught Bible classes. She also coordinated the Vincentian Family gatherings for several years.

For about 10 years, Jocelyne organized the Saint Germain Bazaar where she worked with an extraordinary team of volunteers whose goal was to raise money for the Saint Vincent de Paul meal distribution program at Sacred Heart Parish in south-central Montreal.

Jocelyne touched the lives of many during her life and was well-loved. She has left an impression in each of our hearts where she will remain always.

Well done, Jocelyne. We thank you!