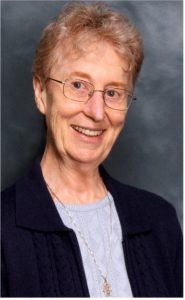 Sister Judith Hebert, D.C., age 85, died at Olive Residence in St. Louis, Missouri on September 17, 2022. The youngest of six children, Sister was born on August 31, 1937 in Boston, Massachusetts to Margaret Barbara (Melrose) and Leonard Louis Hebert. Sister Judith entered the Daughters of Charity on June 5, 1958 at Marillac Provincial House in Normandy, Missouri and attended Marillac College, earning a Bachelor of Arts degree in Education in 1961.

Sister would continue with her educational studies, earning two master’s degrees; the first in Special Education from George Peabody College, Nashville, Tennessee (1969), and the second in Counseling from Webster University, St. Louis, Missouri (1998).

Sister Judith served the majority of her active life in teaching, especially in special needs education, and then in counseling. She began her teaching ministry in 1961 as a Primary Teacher at St. Ann School, Dallas, Texas (1961-1964). She was then missioned to Kansas City, Missouri, where she served at Marillac Center both as a Primary Special Education Teacher (1964-1972) and, three years later, as Department Head (1967-1972). For the next seven years, Sister Judith served at Holy Trinity School in Dallas, Texas where she continued to teach primary students with special needs and serve as department head (1972-1979). In 1979, Sister Judith returned to Kansas City, Missouri where she served as Educational Diagnostician at Marillac Center (1972-1982) and as an Educational Diagnostician and Teacher at the Diocesan Education Office (1982-1986).

For the remainder of her ministry, Sister Judith served in the Archdiocese of St. Louis throughout the St. Louis area: as a School Examiner-Consultant at the Archdiocesan Department of Special Education (1986-1988); a Life Crisis Hotline volunteer (1995-1998); an Internship-Consultant at the Kathy Weinman Child Advocacy Center (1998-2000); a Professional Counselor at Catholic Family Services in Florissant (1999-2014) and as a Prison Minister at the Medium Security Institution on Hall Street and at St. Louis Jail in Clayton (both beginning in 2014 until COVID-19 suspended the service).

The Visitation and Funeral Mass were held September 22, 2022 at Christ the King Church, St. Louis. Burial followed on Tuesday, September 27 at Marillac Cemetery in Normandy, Missouri. On her journey, Sister Judith was supported by hospice and her Sisters at the Olive Residence, which allowed her to be at home until her death.

Sister Judith had many interests which she pursued to the delight of many: liturgical assistant, poet, cooking, and playing the flute – her entire family were musicians. She had a wonderful sense of humor, and her wisdom, prayerfulness, generosity and common sense were appreciated by parishioners at Christ the King and those who knew her and those whom she served throughout the years.

Sister Judith was preceded in death by her parents, her brothers Robert “Bob,” Frank and William “Bill” Hebert and her sister-in-law Olive Hebert. She is survived by her sister, Rosemary and her brother, Dick (Joan) Hebert; several nieces and nephews and their families; many friends; and her Sisters in Community.