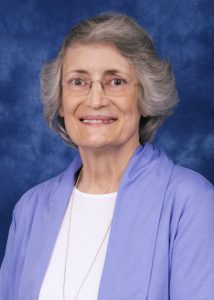 Sister Kathleen Simpson, D.C., died on July 27, 2022 at St. Louise House in Albany, New York. She was 75 years of age and 37 years as a Daughter of Charity. Born in Buffalo, New York, Sister Kathleen was the second oldest of five children born to Donald Robert and Dorothy Adelaide (Kingston) Simpson. She graduated from Mount St. Mary Academy in Kenmore, New York in 1965, and attended the University of New York at Buffalo, where she earned her bachelor’s degree in Human Services, specializing in Social Gerontology and Sociology (1980).

Sister Kathleen’s first mission was at St. Vincent’s Medical Center, Bridgeport, Connecticut, where she served as a Pastoral Care Associate (1986-1988); then, she served as Pastoral Associate at St. Mary’s Hospital in Troy, New York (1988-1992). During this time, Sister studied Clinical Pastoral Education and was certified as a hospital Chaplain by the National Association of Catholic Chaplains.

For the past year, until the time of her death, Sister served in the Ministry of Prayer at St. Louise House, Albany, New York.

Sister Kathleen was predeceased by her parents and her brother, James Donald. She is survived by her beloved sisters: Karen Marie Taylor of Wallingford, Connecticut, Mary Beth Nichols of Amherst, New York, and Susan Patricia Hy of Lancaster, New York. Sister Kathleen is also survived by many loving nieces and nephews and grandnieces and grandnephews, as well as her Sisters in Community.

A wake was held on August 2, 2022 at DePaul Chapel in Albany. A Mass of Christian burial took place August 3, at DePaul Chapel, with internment at St. Agnes Cemetery in Menands.