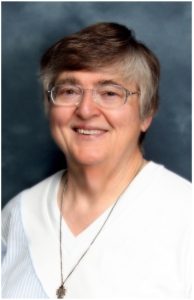 In 2010, Sister Kathleen was missioned to Detroit, Michigan, to serve as Assistant Principal at Christ the King School, where she served until the time of her death. Sister Kathleen served twice as Local Community Superior, her first at St. Patrick School Sister’s Residence (1991-1997). In 2020, she became Local Community Superior at the House of Providence residence, Farmington Hills, Michigan, where she was serving at the time of her death.

The Visitation and Prayer Service took place on Thursday, June 23, McCabe Funeral Home, Farmington Hills Chapel. On Friday, June 24, Sister Kathleen lay in state followed by the Funeral Mass, which was held at the Church of the Transfiguration in Southfield. Burial followed at Mt. Olivet Cemetery, Detroit, Michigan.

Sister Kathleen was predeceased by her mother, Mary Patricia Carpenter; siblings; and her stepfather, Nat Carpenter. She is survived by her siblings, Harold (Beth) and Frances Stafford; six nieces and nephews; and her Sisters in Community.