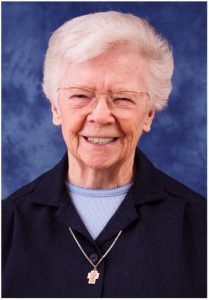 Following initial formation, Sister Mary Clare was missioned to teach at St. Joseph School in Martinsburg, West Virginia (1944-1946). She then began nursing studies at St. Joseph College in Emmitsburg. She continued her studies at The Catholic University of America in Washington, DC, graduating with a Bachelor of Science in Nursing in 1949, followed by a Master of Science in Nursing Administration and Public Health in 1951. That same year, Sister Mary Clare was missioned to St. Vincent’s Hospital in Jacksonville, Florida, serving as Director of Nursing (1951-1953) and Administrator (1953-1960). Sister Mary Clare next served as Administrator at St. Mary’s Hospital in Saginaw, Michigan from 1960-1962. From 1962 to 1983, Sister Mary Clare served in leadership of the Emmitsburg Province, as Provincial Councillor and Assistant (1962-1974) and as Visitatrix from 1974 to 1983. Following these many years of Provincial leadership, Sister Mary Clare was missioned to Sacred Heart Hospital in Cumberland, Maryland and served as Pastoral Care Coordinator for one year. Sister’s next assignment was at Providence Hospital in Washington, DC, serving as the Chief Operating Officer from 1984-1986. She then served as President and Chief Executive Officer at St. Vincent’s Medical Center in Jacksonville from 1986 to 1993.

After a time of personal growth and renewal, Sister Mary Clare served at Elizabeth Seton High School in Bladensburg, Maryland as Assistant in the Development Office (1996-1998), St Agnes Hospital in Baltimore in Pastoral Care (1998-2001) and as Administrator of the Shrine of St. Elizabeth Ann Seton from 2001-2005. Sister Mary Clare served with a joyful spirit and a keen ability to remember people and events. As Sister Mary Clare served as Visitatrix of the Emmitsburg Province at the time of Mother Seton’s canonization, she was especially fond of the ministry of the Shrine and continued to be very supportive. In 2006, Sister was missioned to Villa St. Michael for the Ministry of Prayer, a ministry she held until her death.

Sister Mary Clare was preceded in death by her parents; her brothers, Timothy J. Hughes, Jr., Thomas Hughes, and Fr. Edward Albert Hughes; and her sisters, Margaret Pohlhaus and Katherine Moran. Sister is survived by many nieces, and nephews, friends, and her Sisters in Community.

A wake service was held on Wednesday, June 29, 2022 in the Villa Chapel in Emmitsburg. The Mass of Christian Burial took place on Thursday, June 30, 2022 in the Basilica of the National Shrine of St. Elizabeth Ann Seton. Burial followed in the St. Joseph Cemetery on the grounds.