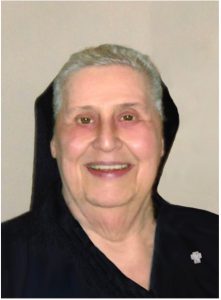 Sister Mary Ellen Schwartz, age 88, died at Villa St. Michael in Emmitsburg, Maryland on January 25, 2022. She was born on June 28, 1933 in Baltimore, Maryland to Ellen K. (Sanders) and Harry O. Schwartz. She graduated from Seton High School in 1951 and in 1955, she received her Bachelor of Arts degree from the College of Notre Dame of Maryland in Baltimore, with a major in Chemistry and a minor in Biology. On March 22, 1956, Sister Mary Ellen entered the Daughters of Charity from her parish of St. Charles Borromeo in Baltimore.

Following initial formation, Sister Mary Ellen was missioned to teach at St. Christine School in Youngstown, Ohio (1957-1960). She then taught Chemistry, Biology and Physics at these schools: Immaculate Conception Academy in Washington, DC (1960-1966), Elizabeth Seton High School in Bladensburg, Maryland (1966-1972, 1985-2001), Holy Cross Regional School in Lynchburg, Virginia (1972-1985). In 2001, Sister Mary Ellen returned to Emmitsburg at the St. Joseph Provincial House, later St. Joseph House, and served in Special Projects and Hospitality. Sister Mary Ellen was known to serve those in need in a quiet way, never calling attention to herself. In 2014, Sister was missioned to Villa St. Michael to join in the Ministry of Prayer, a ministry she held until her death.

Sister Mary Ellen was preceded in death by her parents; brother, Harry Schwartz; and nephew, Harry “Jack” Schwartz. She is survived by her niece Katherine Duck (Chris); nephew Daniel Schwartz (Diane); great nieces and nephews; friends; and her Sisters in Community.