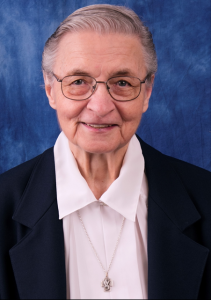 Sister Mary John (Helen Genevieve) Tintea died on September 13, 2022 at Seton Residence in Evansville, Indiana. Sister Mary John was born on June 20, 1929 in Detroit, Michigan and was one of four children of John and Mary (Zaharie) Tintea. Sister graduated from Holy Rosary High School in Detroit in 1949 and entered the Daughters of Charity in Emmitsburg, Maryland in 1951.

After initial formation, Sister Mary John was missioned to St. Vincent Home in Saginaw, Michigan in 1953 where she served as a Group Leader (1953-1962). Sister then taught at St. Catherine Labouré School in Wheaton, Maryland (1962-1965) and at St. Joseph School in Martinsburg, West Virginia (1965-1967). She also served as a House Mother at St. Vincent/Sarah Fisher Center in Farmington Hills (1967-1970) and at St. Vincent Home in Saginaw, Michigan (1970-1971). Sister Mary John then returned to teaching at St. James Major School in Prichard, Alabama (1971-1972). She received a B.A. degree in Theology from Marillac College in St. Louis in 1973, and a CPE certificate from Hotel Dieu Hospital in New Orleans, Louisiana in 1983.

Sister was a Pastoral Care Associate at St. Margaret Hospital in Montgomery, Alabama (1982-1989) and then Chaplain and Receptionist at St. Vincent Hospital and Health Services in Indianapolis (1989-2013). While she was there, Sister would visit the patients with a cart filled with memorabilia of the Indianapolis Colts and received ABC network’s ‘Country’s Most Fabulous Football Fan’ award which allowed her to share her ministry on “Good Morning America” and be their guest at the “Big Game Sunday” in Detroit. Sister then came to Seton Residence in Evansville in 2013 to serve in the Ministry of Prayer until the time of her death.

A Wake Service was held on September 19, 2022 at Seton Residence Chapel, followed by the Mass of Christian Burial. Burial took place in St. Joseph Cemetery.

Sister Mary John was preceded in death by her brother Emil Tintea and her sisters Alice Tater and Marie DeHetre and she is survived by loving nieces and nephews, her Sisters in Community and many friends.