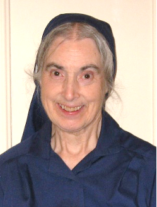 Sister Mary Madeleine Drennan, Daughter of Charity age 93, died at St. Louise House, Albany New York on December 4, 2020. She was born in Philadelphia, Pennsylvania to Mary E. (Dwyer) and Joseph T. Drennan and grew up there with three siblings: Joseph, Mariam and Catherine.

Sister Mary Madeleine entered the Daughters of Charity at the age of 21 and after many summers, graduated from St. Joseph College, Emmitsburg, Maryland. After a brief period of service as an elementary school teacher, she served for 20 years in child care homes in Boston, Philadelphia, Washington D.C., and at the Troy, New York, Day Care Center. A tall, beautiful woman with warm brown eyes, she delighted in children throughout her life.

An accomplished cook and seamstress, Sister Mary Madeleine was the food manager at Kennedy Child Study Center, Manhattan where she prepared meals for the special needs children who attended school there and for the Sisters. She also sought out the workers on the upper East side of Manhattan – doormen, housekeepers, domestics – and was a friend to all in need. Her compassion and generosity went far beyond the confines of the kitchen.

In 1993 Sister Mary Madeleine came to St. Mary’s Hospital, Rochester, New York and while there was diagnosed with a serious illness. Her great devotion and prayer to Blessed Mother and St. Elizabeth Ann Seton brought about an unexpected return to health.

In 2003 she was missioned to St. Mary’s Hospital, Troy, New York and came to St. Louise House several days a week to help with sewing and mending. Always the servant, she delighted in being able to help the Sisters in this way. She came to St. Louise House as a resident in 2011 as her health began to fail and entered into the Ministry of Prayer; she served there until the time of her death.

Sister is survived by her niece Jane Ryan of Devon, Pennsylvania and several other nieces and nephews, her Sisters in Community, and many friends.