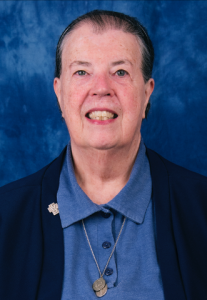 Sister Teresita (Mary Therese) Heenan died on January 1, 2023 at St. Vincent Ascension Hospital in Evansville, Indiana. Sister was born on October 5, 1941 in Chicago, Illinois and was one of two children of Joseph and Eileen (Fitzsimmons) Heenan. She graduated from Academy of Our Lady in Chicago in 1959 and entered the Daughters of Charity in St. Louis, Missouri in 1960.

After initial formation and a B.A. degree in History, Sister Teresita was sent to serve as an elementary teacher at St. Louise de Marillac School in St. Louis, St. Theresa School in New Orleans, Louisiana, Most Precious Blood School in Denver, Colorado, Cathedral Schools in Natchez, Mississippi, St. Francis de Sales School in Lake Zurich, Illinois , St. Barnabas School in Birmingham, Alabama and St. Christine School in Youngstown, Ohio. Sister also worked as a Parish Minister at St. John Parish and as a Pastoral Care Associate at St. Mary Medical Center, both in Evansville, Indiana. Sister Teresita served as a Seton Shrine Docent in Emmitsburg, Maryland and as an Archival Assistant at Mater Dei Provincialate in Evansville. She came to Seton Residence in 1999 to serve in Pastoral Care and in the Ministry of Prayer until the time of her death.

A Wake Service was held on Thursday, January 5, in the Seton Residence Chapel, followed by the Mass of Christian Burial. Burial took place in St. Joseph Cemetery. Sister Teresita was preceded in death by her parents and her brother William Joseph (Kathy) Heenan and she is survived by nieces and nephews, her Sisters in Community and many friends.