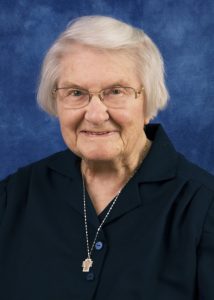 Sister Virginia Metz, D.C., passed away in Albany on September 15, 2021. Sister Virginia (Arlyne Virginia) was born on October 23, 1917 in Bath, New York to Henry John and Josephine Clara (Kruezberger) Metz. Sister had two siblings; a brother, Henry and a sister, Audrey McCulloch, both of whom predeceased her. She graduated from Cathedral Academy in Albany, New York in 1936 and entered the Daughters of Charity in March 1937 in Emmitsburg, Maryland.

After completing her initial formation, Sister Virginia began her ministry in the medical records field and as administrator in construction projects in several hospitals operated by the Daughters: Buffalo, New York; Baltimore, Maryland; Jacksonville and Pensacola, Florida; Boston, Massachusetts; Bridgeport, Connecticut; Waterville, Maine; and Rochester, New York. She served as a most respected Director of Medical Records as well as Administrator for major hospital construction and Provincial House construction projects.

In 1990 she joined the administration at DePaul Provincial House in Albany, New York and in 1994, she became Assistant to the Provincial Treasurer. She had good health and remained alert and active until the last few months of her nearly 104 years. She was predeceased by her siblings. She is survived by nieces and nephews, in particular, Sandra Paniccia; by numerous friends; and her Sisters in Community.