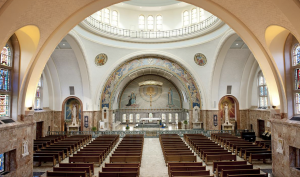 Spiritual essays, an at-home retreat and breaking ground on an expanded museum are among the initiatives planned for the National Shrine of Saint Elizabeth Ann Seton for 2022.

The shrine in Emmitsburg honors the first American-born saint. This week marks the shrine beginning publishing a bi-weekly series of spiritual essays dubbed the “Seton & Culture Series.” The essays profile Catholic artists, novelists, poets and visionaries, from the perspective of Elizabeth Seton’s life and spirituality, the shrine said in a news release.

“Throughout her life, Mother Seton was devoted to the good, the true and the beautiful, especially as expressed through culture and art,” Rob Judge, executive director of the shrine, said in the release. “This series will allow us to explore another side of Elizabeth Seton, through distinguished writers who are using their gifts to turn our attention to the higher things.”

The first essay in the series is by Catholic poet Paul Mariani, who “describes the sensations of a concerto and the profound feelings it elicits through the eyes of Thomas Merton and Mother Seton,” the release reads. Other essay subjects will include poet and Catholic convert Denise Levertov and former Hollywood actress Mother Dolores Hart.

Looking ahead to warmer days, the shrine expects to break ground by summer on a fully renovated and expanded museum that “will highlight the life and legacy of Mother Seton and the sisters who took her message to the world,” according to the release. Funds for the effort are nearing the $7 million goal through the shrine’s “New Century of Charity” capital campaign.

As new COVID-19 cases crop up across Frederick County, the shrine is expanding its Seeds of Hope program to offer a written, at-home retreat for the first time.

“The at-home, one day retreat guide will be based on the Seeds of Hope retreat model and will give individuals across the nation who are struggling with anxiety and despair a method for applying Mother Seton’s spirituality to their lives, to build up faith, hope and resiliency in a time of uncertainty,” the release reads. “This effort is in keeping with the mission of the Sisters and Daughters of Charity, the religious congregations who trace their roots back to Mother Seton and who, for two centuries, have cared for those who need it most.”

The at-home program is planned for release during the Easter season, and the shrine hopes to resume regular retreats for the poor onsite this year.

Finally, the shrine will offer a 15-day email prayer program called Lift Up My Soul. The program is based on a book by Betty Ann McNeil, D.C., who “uses the writings of Mother Seton to help readers integrate 15 themes of her Catholic faith into daily life,” the release reads. Those who are interested can sign up through setonshrine.org.