Although she died 201 years ago, devotees of America’s first native-born saint believe she can be a great role model for these troubled times.

That’s one of the main reasons behind the $4 million investment to renovate the museum and build a new visitors center at the National Shrine of St. Elizabeth Ann Seton in Emmitsburg.

The year-long construction project is scheduled to begin this fall with the goal of enhancing the experience for pilgrims who want to learn more about St. Elizabeth Ann Seton. 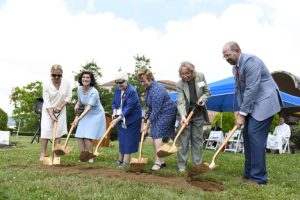 The shrine held a ceremonial groundbreaking June 24. When it’s completed in late summer of 2023, the museum will include state-of-the-art galleries with interactive exhibits telling St. Elizabeth Ann’s story from childhood to sainthood.

It will be the first significant renovation of the museum in 40 years in a town where Mother Seton established the first American congregation of religious sisters, the Sisters of Charity of St. Joseph in 1809.

Rob Judge, the shrine’s executive director for the past decade, said the mission of the upgrades to the visitors’ experiences is to shine a brighter light on Mother Seton. He said there were a lot of artifacts that the current museum didn’t have space to display, and others that were recently donated.

“We want to use those artifacts to tell Mother Seton’s story,” said Judge, a parishioner of St. Mary in Hagerstown. “The mission is to share her life with more people; why she did what she did and why she is a role model and intercessor; someone who inspires people.”

Judge said new exhibits on her marriage and life as a mother of five will better tell the stories about her passion for religious life and her devotion to the Eucharist.

The PRD Group of Chantilly, Va., which recently did work on the Gettysburg Seminary Ridge Museum, helped with design plans.

The national shrine is an active basilica and includes historical buildings and programs that show what life was like when Mother Seton lived there more than two centuries ago.

The plans call for a reconfiguration of the original provincial entrance into a new visitor center for the estimated 60,000 people who come to the shrine each year. The shrine’s campus allows visitors to worship in a basilica, while also touring the grounds and buildings where Mother Seton and her congregation lived.

Mother Seton’s legacy includes several religious communities with thousands of sisters, who serve others through schools, social service centers and hospitals throughout the world. She was canonized in 1975 and her remains are entombed at the shrine.

The sisters following her mission are delighted to see their patron’s legacy enhanced.

“Our sisters are very excited,” said Sister Mary Catherine Norris, provincial of the Daughters of Charity, province of St. Louise and a member of the shrine’s board of directors. “They’re excited to have the space utilized in such a way that they will see the pilgrims coming and going and have opportunities to interact with people, which we think will be lovely.

“I think they’ll add another element of welcome to people who are coming. They’re happy to have folks come and share in the legacy of Mother Seton.”

Visitors will be able to see the bonnet St. Elizabeth Ann wore after establishing the community and the dancing slippers she wore as a girl as well as her daughter’s christening gown.

“Since the past is this big, distant thing, it doesn’t always feel real,” said Scott Keefer, archivist for the Daughters of Charity, St. Louise province, who is based at the shrine. “To correct that, to show that this was a real person, that’s a big hurdle to overcome. Hopefully this museum will help.”

Leaders with both the Sisters of Charity and the Daughters of Charity think the museum will be an essential part of introducing Mother Seton to new audiences who are looking for a saint to whom they can relate. 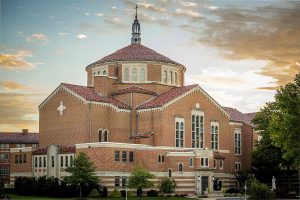 “We’ve been talking for a while now about the awareness of Elizabeth Seton as saint for our time,” said Sister Donna Geernaert of the Sisters of Charity Halifax and chair of the Seton Shrine board. “Thinking about the era in which she lived and the role of women in that time, Elizabeth really stands out as a strong woman.

“There is nothing like looking at Elizabeth’s dancing slippers to realize she was a person who loved life. More and more today we need to speak to the love of life and her commitment to faith and the care of her family and friends.”

The enhanced exhibit will help her continue to serve as a great role model.

“Her struggles are just as relevant today as they were 200 years ago,” said Sister Mary Catherine. “The legacy of Mother Seton is she was fearless at a time when women weren’t exactly known for that. She’s a great role model whether you’re a mother, an educator, a daughter or a widow.”

Funding for the renovations is coming from the “New Century of Charity” capital campaign that was launched in September as part of a commemoration of the 200th anniversary of Mother Seton’s death. The initial fundraising began nearly three years ago and the campaign has received more than 1,300 gifts and raised more than $10 million.

After the renovations, the remaining funds will be used for the shrine’s charitable endeavors and retreat programs.